Are you a children’s or teen librarian looking for some new books to add to your professional collection? I am lucky enough to be part of three book projects that I highly recommend! All are published this Spring or Summer and range in scope from the everyday guide to the academic reference. These are resources rich with content contributed by researchers and practitioners who are experts in literacy of all kinds. Enjoy!

CT Skill: Decomposition is the CT skill that involves breaking larger actions into smaller, easily completed steps. We do this when we sing and clap words to break then down into syllables.

In a music storytime, among other books, I shared I Got the Rhythm by Connie Schofield-Morrison and Frank Morrison which follows a young girl and her mother on a walk around their community. On the mini-adventure, the girl creates individual moves that become a dance accompanied by the music created by neighbors.

Afterwards, families visited stations that included: music-making with Makey Makeys, building rubberband kazoos or egg shakers, instrument exploration and mixing music with the app Loopimal on one of the library’s mounted iPads. 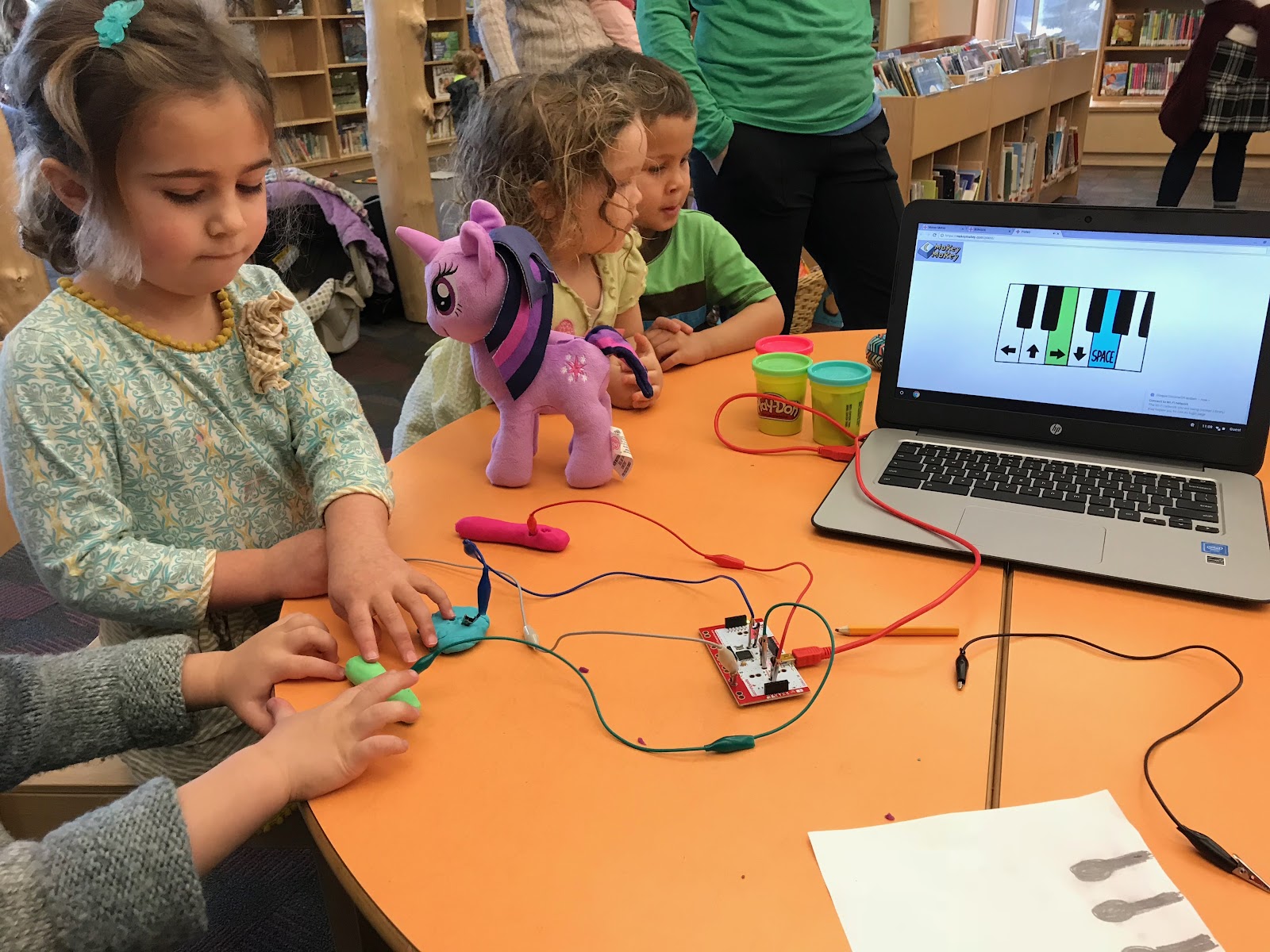 At the Makey Makey station, the computer was connected to the pieces of Play-doh with several wires, each going to a different clump of clay, via the Makey Makey. Young musicians touched a clump of Play-doh with one hand and held the “ground” with the other, creating an electrical circuit, and then a corresponding note was played on the digital piano. Once they figured out which Play-doh piece made which sound they created songs to their liking. (The Makey Makey tricks the computer into thinking the Play-doh clumps are keys and creates an electrical circuit. So if the Play-doh, which is conductive, is pressed or tapped, something happens on the screen. In this case a key on the digital piano is played.)

Both the book and making music with a Makey Makey exemplify breaking down (decomposing) music and dance into its components, but they also demonstrate how to build something back up, songs or dances, using other CT skills like pattern recognition and algorithm design.

Want to learn more about CT for you children? Paula Langsam and I will be talking more about the CT and early literacy connection at ALA Midwinter in Seattle.

In a recent webinar about Computational Thinking (CT) and early literacy for the Public Library Association, Paula Langsam and I highlighted several activities that can be used to support both sets of skills in storytime or another library experience. (The link to the recorded webinar is coming soon.) Some of the activities we mentioned are in the Libraries Ready to Code Collection, while others have come about after our work with the cohort. They will eventually be added to the collection, but for now we’ll be posting them here. Keep checking back for more!

Pattern recognition, one of 4 commonly recognized CT skills for young children, involves identifying and classifying similarities. When we play the game Simon Says with children, they are using a pattern to know when to do the action mentioned and when not to. If I say “Simon Says touch your nose”, kids are supposed to touch their nose. If I say, “touch their nose” they do not. This game also introduces conditional statements and logic, both fundamental to computer science.

Adaptations:
In storytime, some kids may easily get how this game works and some need more experience. I adjust the actions and physically model when and when not to do the action for kids new to the game. I do less modeling for more experienced players and even let kids lead if appropriate.

As part of #CSedWeek 2018, I included activities (and grownup tips) that support Computational Thinking (CT) skills in my storytimes. One of these activities was feltboard programming.

I first tried feltboard programming about a year ago and I continue to tweak the activity here and there depending on the group, the topic and the context. This week I found myself gravitating towards a lot of snow books, despite the warm weather. Maybe it’s wishful thinking. To go along with those books, I decided to have kids help me make an algorithm for building a snowman.

Here are the books I shared:

I prefaced the feltboard algorithm activity by telling the kids that I forgot how to build a snowman. I then explained that I needed their help to know how to build one. When it finally snows again, I want to be ready, even if they are not around to help me. What follows is the process I used with the kids to create a feltboard snowman.

I have two feltboards so I used one for the “algorithm” and one to actually build the felt snowman using the algorithm. I made image cards that acted as symbols for the different parts of the snowman. (I only made cards, or blocks, for the actual objects. We talked a lot about where the objects should go as we applied the algorithm to the building process.) Before storytime, I had organized the cards on one felt board so kids could see what parts they had to work with. I told them they did not have to use all of the “blocks” (cards) and that they could choose where the objects were placed and the order in which we added them.

I told grownups that this type of programming was similar to the coding older kids would be doing later in two different CSedWeek programs: <HPLCode> Unusual Discovery using CS First and Scratch or <HPLCode> byte sized using ScratchJr.

Next, we built the algorithm. To get things started, I asked the kids what we part we should add first and everyone wanted to begin with the body by having me move 3 snowball cards. Note: We read Snowballs before this activity and talked a lot about the parts of the snow people, whose bodies are all made up of 3 snowballs. Looking at the materials Ehlert uses, and the body parts she includes, was useful for this activity and the art project kids worked on after stories.

We built the algorithm from top to bottom, acknowledging that this how we read and write in English. Kids articulated what they wanted to add and in the order they chose. I moved the cards from the board above to the board pictured below, as they made decisions, because I wanted them to use words to describe what they were referencing; all the while practicing turn-taking and compromising, or at least considering others’ suggestions. Here is the algorithm they helped me make.

And here is the snowman we built based on the algorithm. Different kids took turns adding the different felt pieces after we talked about what would come next and where the object was supposed to go. This activity and process emphasized the sequence,.an important concept in CT, literacy and math.

When the first child went to put a felt piece on the board, she wanted to put the first snowball on top, instead of on the bottom, to reflect the order we created with the cards. So obvious, right? Some preschoolers think this way and some are able to think more abstractly. It’s all ok and we move gently through this process, keeping it fun.

We talked a bit about gravity as a group- what would happen if we tried to put the first snowball on the top (in mid air). As a group we figured out that the first ball has to go on the bottom to give support for the others. What I love about practicing this process in storytime is that we already figure out the names of letters, how things work, what to read next, etc. as a group so we did this as a group. I emphasize that it is ok to try, even if what happens is not the intended outcome. If it doesn’t work, we just try again. That’s what happened here.

Below is what a child made later while I was busy helping families with the craft. She wanted to practice making an algorithm based on the felt snowman we built. It’s fascinating to see how kids think. It’s a great example of the CT skill decomposition in action.

I don’t expect every kid to get new concepts or skills right away so we’ll try this again and continue to talk about sequences, patterns, and all things CT, early literacy, math and more.

And here are a couple examples from the art project! I gave kids a bunch of materials and challenged them to create a snowman or snow creature out of them. Some built snowmen out of three blocks of foam with lots of accessories and appendages and some went this route, using the foam blocks as stand for the snowman pieces. I think the kids found this project so much easier to dive into than the adults…

This kind of art activity, open-ended but with a design challenge, gets kids thinking about the process, and sequences, in a creative way. There were a lot of proud artists leaving the library today.

Throughout the week, I have this display (below) in the kids library (for ages 0-12) so families can consider how they might support CT skills with their kids, small and big, at home.

For the past several years I have been offering a special coding program (as part of the worldwide Hour of Code event) or another learning experience that supports Computational Thinking (CT). Why libraries? Kids and teens need CT skills, along with traditional literacy skills, to be able to effectively communicate and express themselves in the Digital Age.

Want to know more about the connection between CT and early literacy? Join Paula Langsam (DC Public Libraries) and I for a free webinar on Tuesday, December 4th called Thinking Sideways: Computational Thinking and Early Literacy. It is hosted by the Public Library Association. (Registration required.)

Here are some of the activities I will be including in CSed Week 2018:

Looking for program ideas and other resources? The Libraries Ready to Code collection (aka toolkit) is now live!